As of this day, March 31th my running totals are as follows.

I'm still behind, but fuck it, like it matters.
Posted by Dr.Salt at 23:59 No comments: 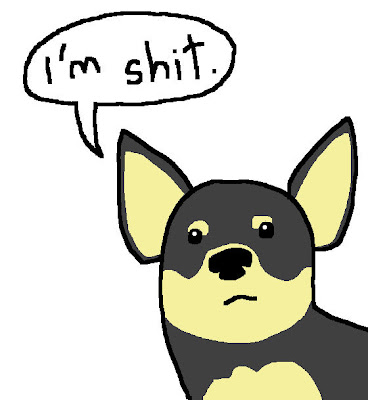 I asked my buddy James what sort of dog I should draw, and he said "a Chihuahua saying 'I'm shit'."

Nobody likes Chihuahuas.
Posted by Dr.Salt at 23:43 2 comments:

First attempt above, second attempt below.

This fella is kind of Super Mario 3 styled. He's not so hot, so consider him a work in progress, yo.

EDIT: Here is my second attempt. 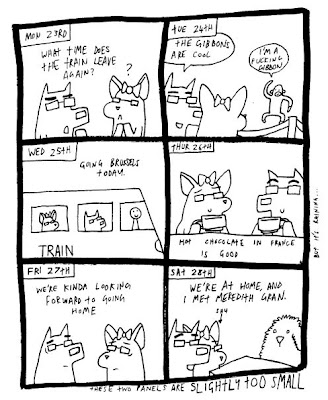 Here are the dogs I drew last week, yo. My sincerest apologies to Meredith Gran who is lovely.
Posted by Dr.Salt at 17:24 No comments: 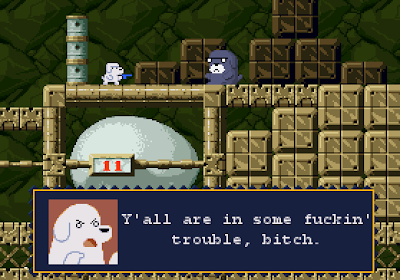 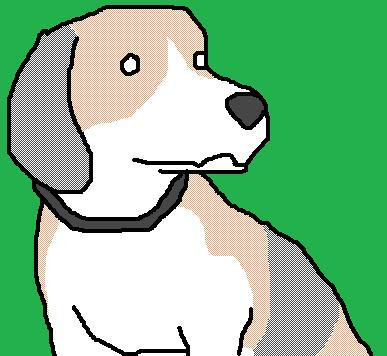 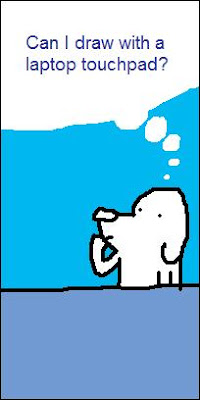 This is another attempt at a more Cave Story styled sprite. 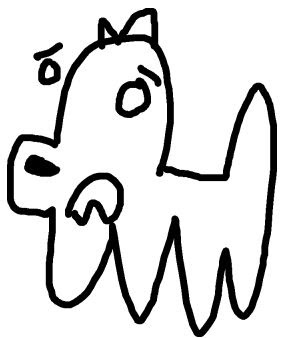 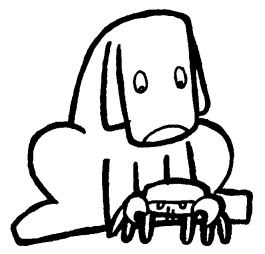 This is a backdated post from the 18th. I was living it up in Brighton today, and was unable to post this dog.
Posted by Dr.Salt at 18:50 No comments: 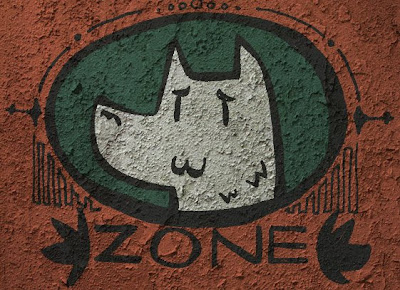 I am not able to post today, thought fear not, I will still be drawing a dog. Filling in for me today is my buddy Burgertime with this piece called "ZONE". Please enjoy, and stay tuned for more dogs from me.
Posted by Dr.Salt at 18:49 No comments: 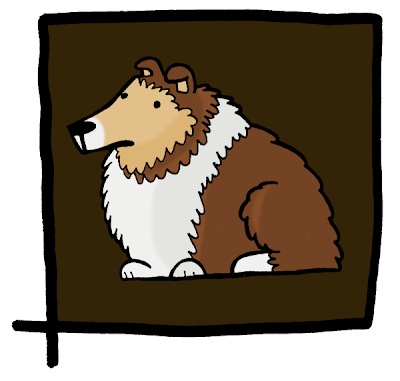 I saw a fat collie today. It was awesome. Lassie was a rough collie I think. Jaws tells me that Lassie was actually a female, and I figure this is because they didn't want to show dog balls on TV. I also remember being told that in the old black and white films they used to slather little Timmy's face in vanilla ice cream so the dog would lick him.
Collies are very intelligent dogs and easy to train. They are so easy to train there are now ABC Dog Shows. The "ABC" standing for "Anything But Collies".
I did zero research for this article.

Fat Collie
Posted by Dr.Salt at 17:57 No comments: 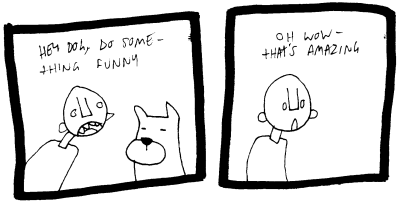 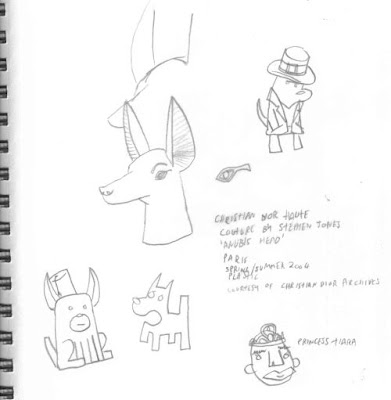 I went to three different museums today, and I'm tired.
Posted by Dr.Salt at 22:15 No comments:

Things I Learned: The dog's bollocks. 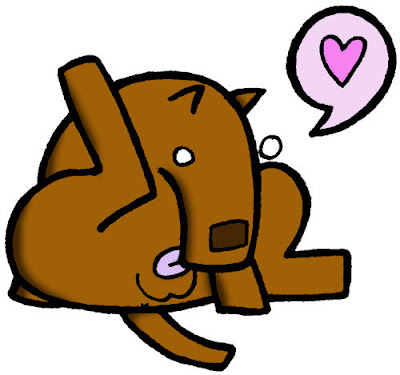 Jaws told me she thought I was the bee's knees today, so I reciprocated by telling her I thought she was the dog's bollocks. She did not believe this was a good thing, so after feeling lucky with Google I found a short definition here. I suspect my American audience might find this interesting.

"Excellent - the absolute apex. In other contexts the word bollocks (meaning testicles) has a negative connotation. For example:

The reasons why the 'dog's bollocks' are considered to be the top of the tree aren't clear. It may be linked to an associated phrase - 'stand out like a dog's balls', i.e. 'outstanding', although I can find no evidence to indicate that phrase as being earlier than the 'dog's bollocks'. Dogs do enjoy licking their genitals of course but again, there's no evidence that links the coining of this phrase to that. It is most likely that this is just a nonsense phrase, coined because it sounds good. In that, it would join a long list of earlier nonsense phrases, e.g. 'the cat's pyjamas', 'the bee's knees' etc."

Things I Learned: Dogs have bones.

Let me share with you a short exchange of text messages.

"Me: Do you have any interesting facts about dog skeletons?"

"AQA: A dog tail has a bone. A dog's body consists of 319 bones. If a dog's tail is docked or absent at birth, there are fewer bones in the skeleton."

There you are. Dogs have bones, and if some are missing there will be less of them. This is one of the many interesting and useful facts you learn from my blog, yo.
Posted by Dr.Salt at 23:00 1 comment: 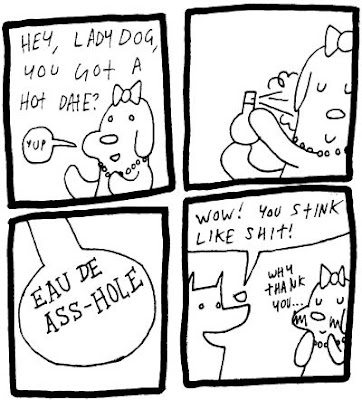 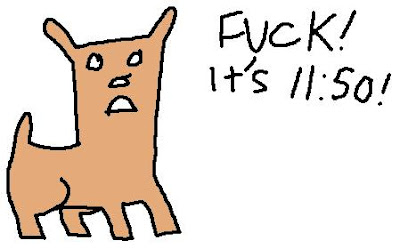 Another Tegaki doo-dah. Also, while on Tegaki I saw an advert for something called MajorOutput. Where I drew this: 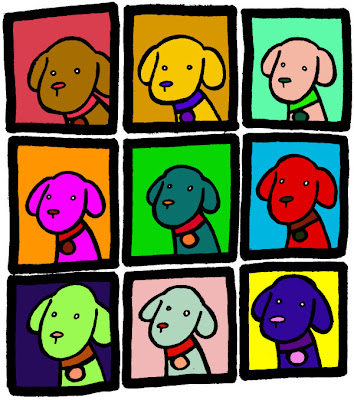 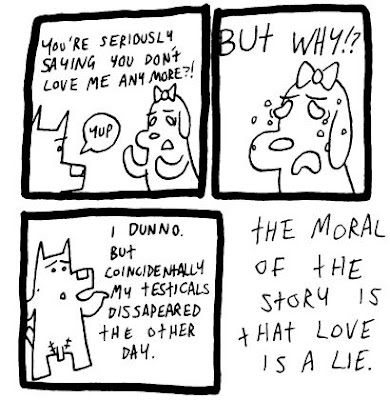 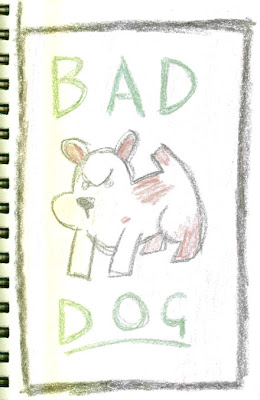 I bought a box of crayons today, and then the scan washed out all the colour. Money well spent.
Posted by Dr.Salt at 23:12 No comments: 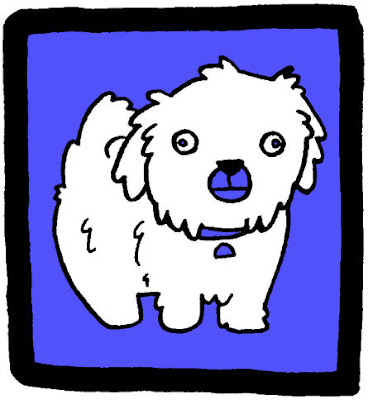 Like the Pug the Pekingese originated in China. Which makes me assume that small, kinda ugly animals were all the rage in ancient China (They would have probably liked the naked mole rat or Danny DeVito). According to my main source of information for these articles the Pekingese is also "commonly" referred to as "Lion Dog". I've never heard this, and it doesn't make a bit of sense to me. They kinda have a fluffy mane thing going on, but they're hardly the most ferocious looking beast. They'd be more likely to keel over from heart failure that chase down carriboo, which is a shame not only because health problems caused by breeding are tragic, but also because that would look awesome.
Apparently Pluto (Mickey Mouse's dog) had a girlfriend called Fifi the Peke, who was Minnie's Dog. This is one of the many interesting and useful facts you learn from my blog, yo. 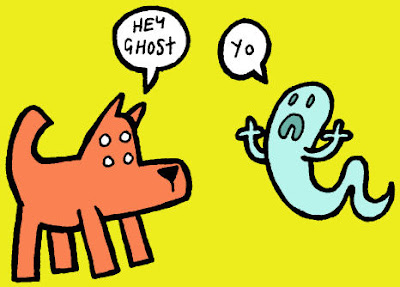 Today I visited the British Museum with Jaws and I learned an interesting thing about dogs, so I decided to knock together an ad hoc feature. These are going to be mostly things I remember vaguely rather than full on facts.
Apparently, people of the Kongo during the 19th century believed dogs were mediators between the living and the dead, and we able to see spirits and other general bad stuff floating about that we humans can't.
The little placard underneath the weird dog sculpture said something about them having 4 eyes, but I didn't really get it. This is how I imagined it, but I wish I had just drawn a normal dog with glasses now. I missed an obvious joke there.
Posted by Dr.Salt at 22:32 No comments: 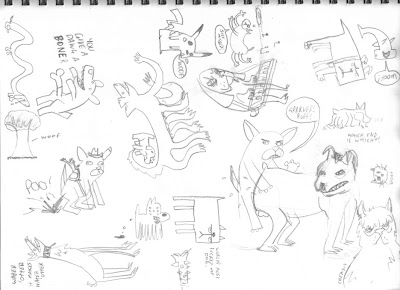 Here's some dogs I drew with Jaws at the pub tonight.
Posted by Dr.Salt at 23:04 No comments: